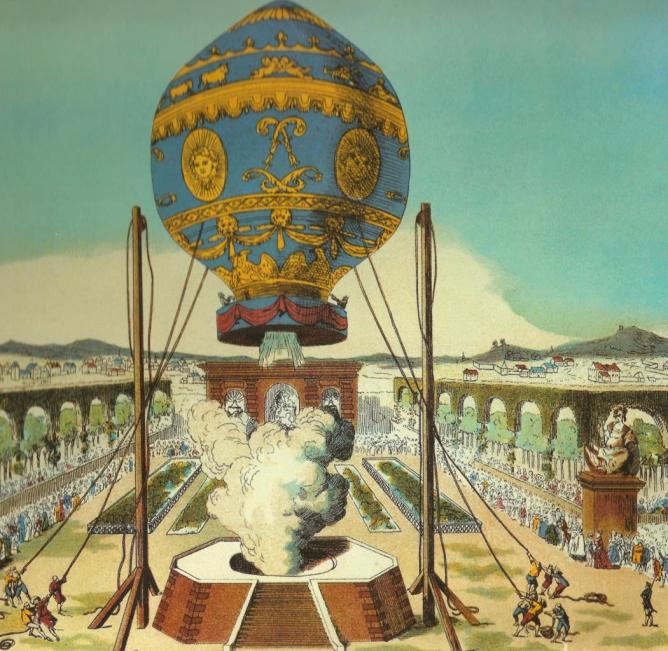 First ascent of a balloon : A few years before the revolution of 1789, the Montgolfier brothers, Joseph and Etienne succeed to fly 4 June 1783 a balloon canvas and paper inflated with hot air produced by the combustion of a mixture of straw and wool. The balloon will rise to over 1000 meters in the sky of Annonay and cross a distance of 2 km. A few months later, at the request of King Louis XVI, the two brothers succeed the exploit to fly a 400 cubic meters balloon taking on board a rooster, a duck and a sheep facing the court convened by the King.

First balloon trip : November 21, 1783, Pilâtre de Rozier and the Marquis d’Arlandes fly in a hot air balloon of 2200 cubic meters. The two men carried out the first air travel. They take off at Château de la Muette in Paris and reach their maximum altitude, 1000 meters above the Tuileries. After 25 minutes of flight, the aircraft will touch down at Quai Butte.

First flight of a gas balloon : a few weeks later, a 800 m3 gas balloon led by physicist Jacques Charles and Nicolas Robert rises in the sky. The hydrogen-filled balloon will travel 2 hours and will travel 36 kms.

First crossing: The French Jean-Pierre Blanchard and American John Jeffries physicist perform for the first time the crossing of the English Channel in a balloon filled with hydrogen. They align Dover (England) to the French coast. Their achievement will not take place, however, without difficulty: the two adventurers will drop the empty string their car as well as some of their clothes in order to maintain altitude.

The Golden Age : throughout the 19th century, the balloon becomes very popular. Numerous public ascents will be organized and will always attract more people. The ballon will also be used for military purposes particularly in the area of intelligence (victory of Fleurus in 1794) and logistics during the siege of Paris in 1870

Decline: After a promising start, the balloons will soon be supplanted by gas balloons. The balloons were difficult to implement with fire inside. The burner has not yet been invented, the balloons were inflated and then dropped to the ground for a flight of about ten minutes.

The modern hot air balloon : In the early 60s, several technological innovations such as the use of nylon envelope, the invention and use of the burner and propane gas as fuel will boost the balloon. The balloon flights, previously reserved for the elite will gradually be democratized with the arrival of large or very large balloons.